A Visit to Norwich

The city of Norwich stands on the River Wensum approximately 100 miles North East of London. Norwich is a lovely place to visit. It has a very pleasant atmosphere and there are plenty of things to see and do. Situated within the Norfolk Broads National Park it is the ideal base to explore the county of Norfolk. It has direct rail links to London Liverpool Street and excellent connections to other parts of the country. The coastal towns of Lowestoft, Great Yarmouth and Sheringham are all within easy reach. Norwich itself has much to offer the visitor. Architecturally, the city is a delightful mix of old and new and is very attractive in appearance.

For over seven hundred years Norwich was England’s second largest city and Norfolk was England’s most prosperous county, mainly due to the success of the local wool trade. Norwich was ideally situated with the Rivers Wensum and Yare facilitating the export of the city’s wool. Through wool the city grew and prospered. 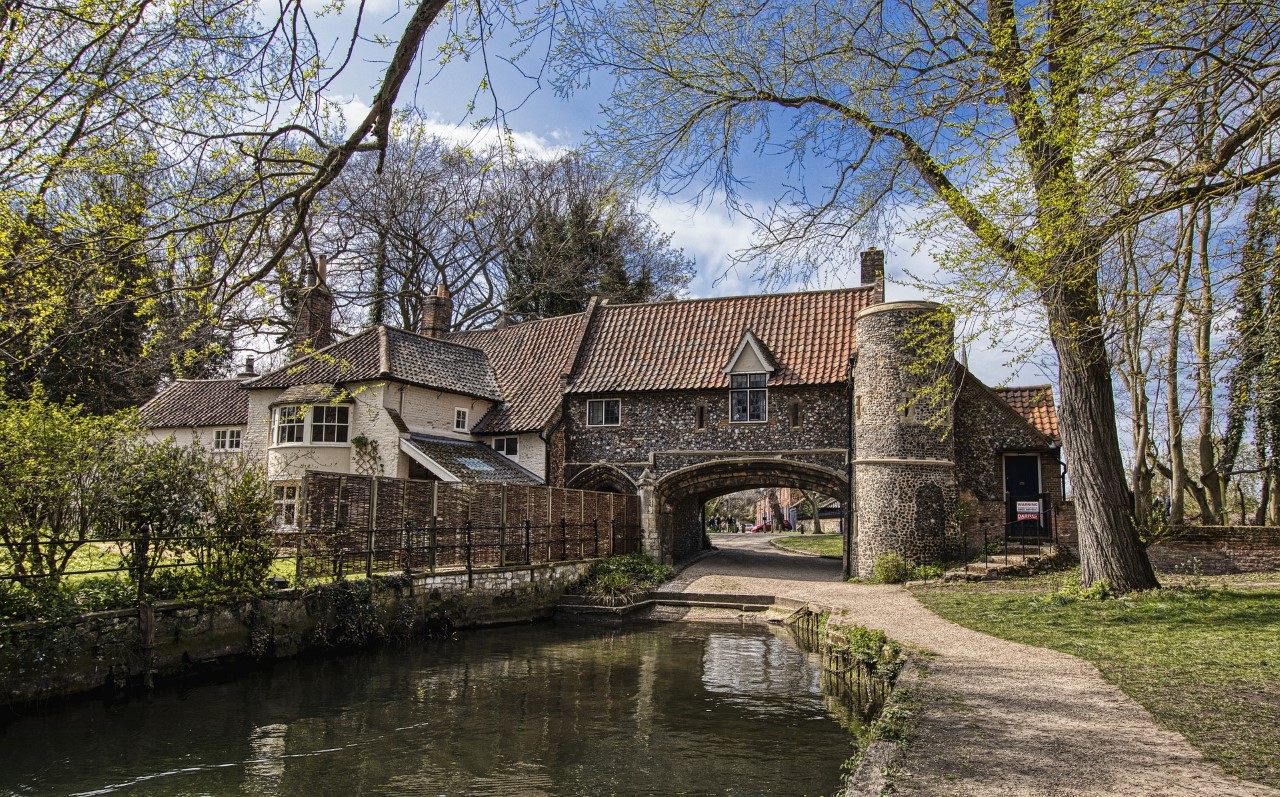 All was not peace and harmony, however. In 1272 a riot broke out that saw fires in the Cathedral, the people’s reaction to planned tolls at the annual fair. In 1349 the Black Death ravaged Norwich with 2,000 of its inhabitants losing their lives, about one third of the population at the time. 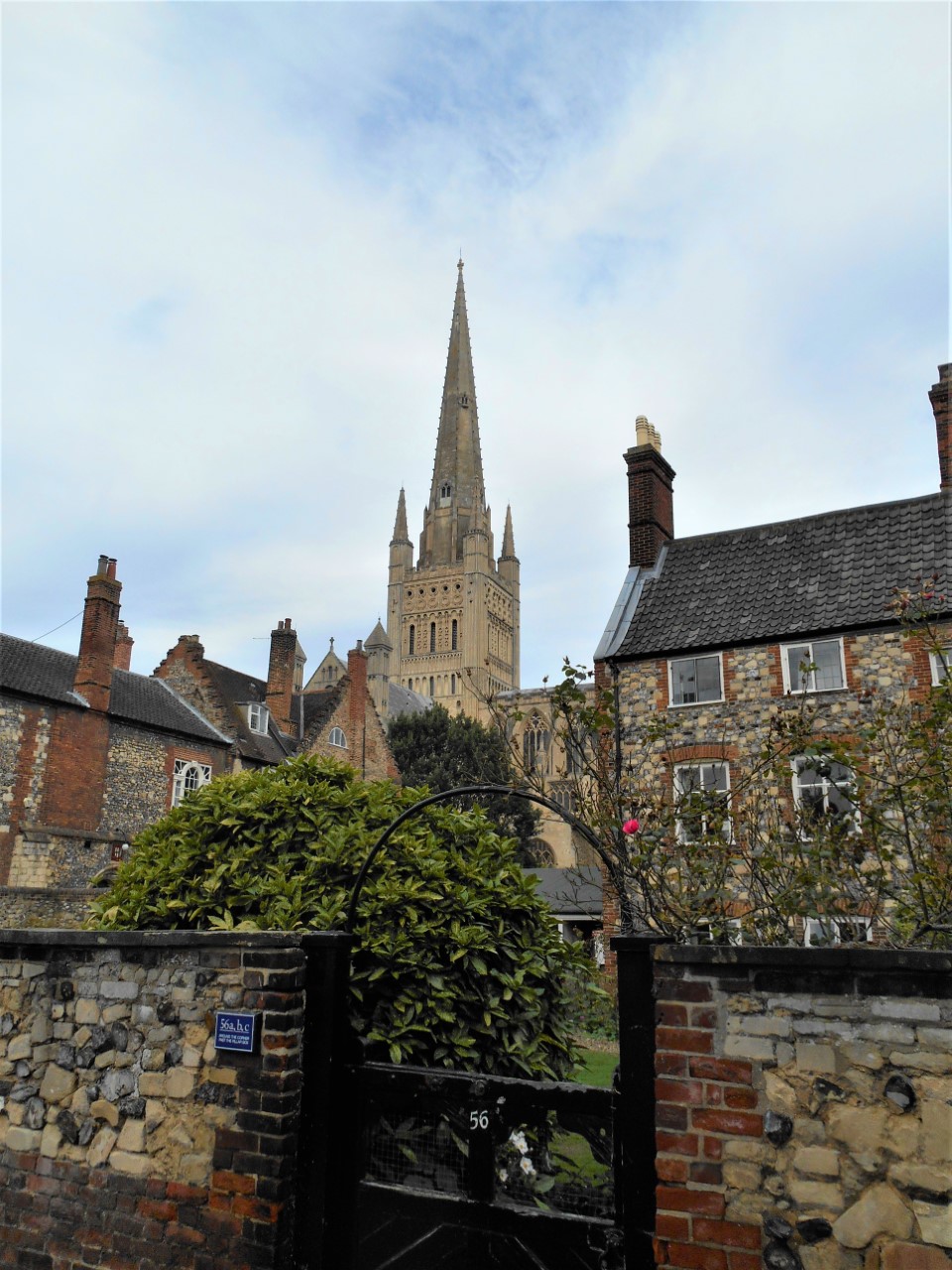 Norwich Cathedral towers over the city and with its impressive 315ft spire it can be seen from miles around. Archaeology puts religious activity on the site of the Cathedral, at around 1500 years. The Cathedral itself was built in the 11th Century but remains indicate that Anglo-Saxon cremation took place in the same area. It certainly is an impressive building, so much so that it often features on the big screen, having made appearances in the Harry Potter films and the 2013 fantasy blockbuster, Jack the Giant Slayer. When we were last in Norwich, we were thrilled to see a pair of peregrine falcons nesting at the base of the spire. Looking tiny from the ground, the golden cockerel weather vane, atop the spire measures a decent 2ft 9in. Built in the Romanesque style, the cathedral welcomes visitors of all faiths and none, and is set in 44 acres of stunning grounds. Amazing architecture, stained glass windows and beautiful lighting inside combine to make visiting a wonderful experience. If you do visit the cathedral don’t forget to look up at the ceiling! There you’ll find the most beautifully rendered medieval roof boss sculptures. They really are worth seeing, some are beautiful, some are quite ugly and some are amusing but the skill with which they were produced is quite incredible. There are over a thousand of these little sculptures so you’ll need some time to spot them all. 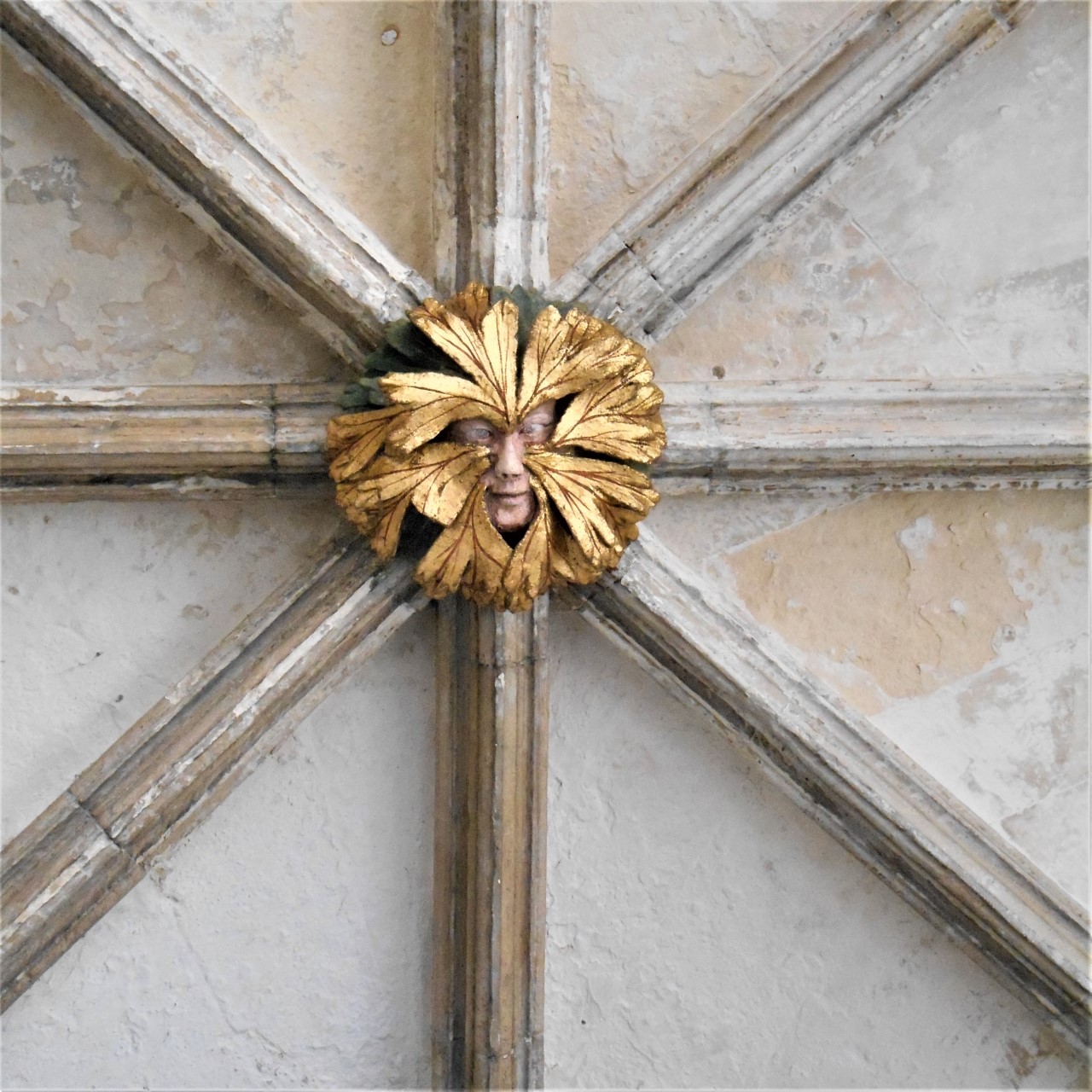 Another feature of the cathedral, which is sure to impress, are the monastic cloisters which are the largest in England. 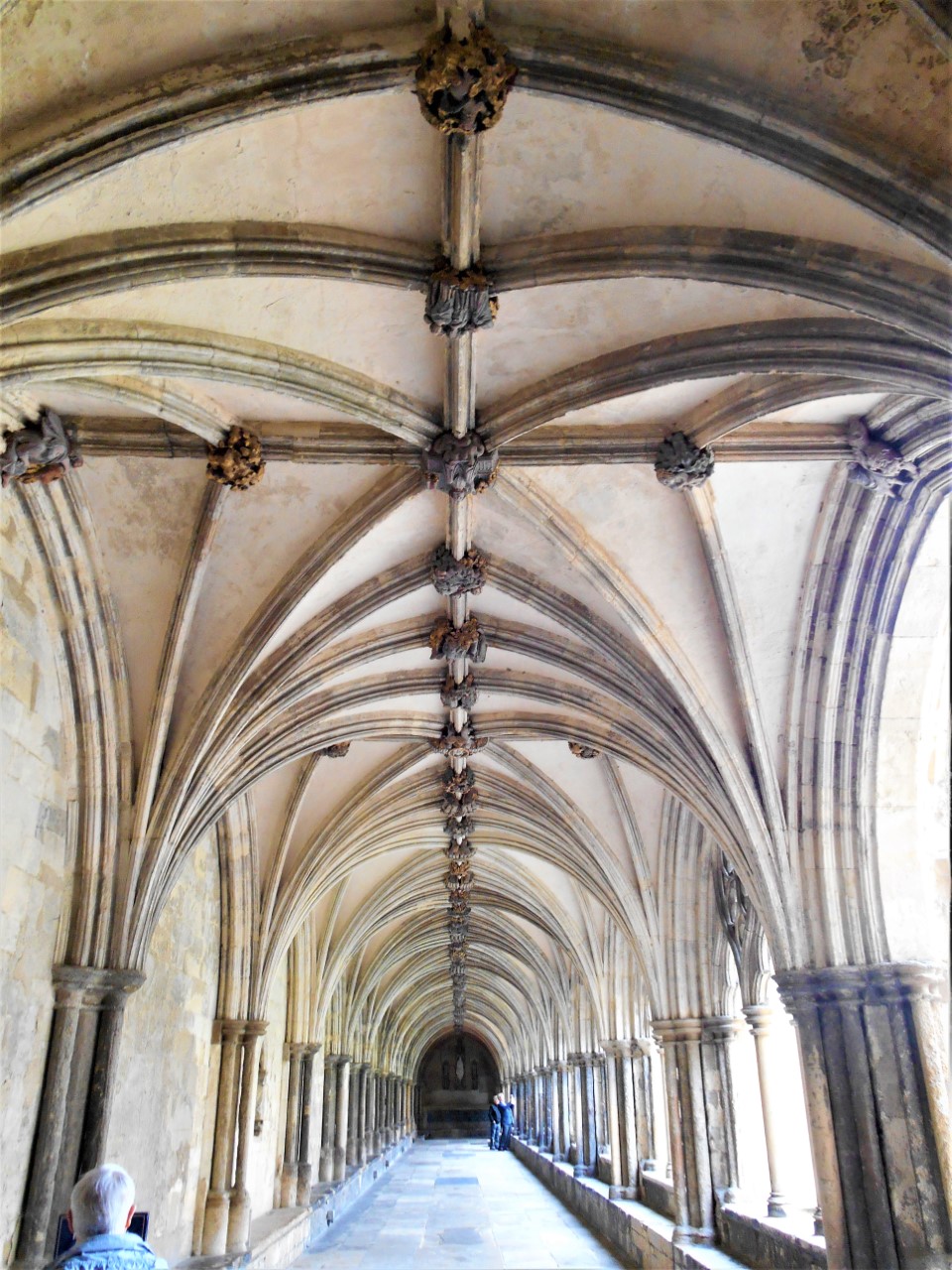 Close to the cathedral you’ll find Elm Street. Once home to the merchants and traders of Norwich the medieval street is practically picture perfect. It’s along this cobbled street that you’ll find a large number of unique independent shops. 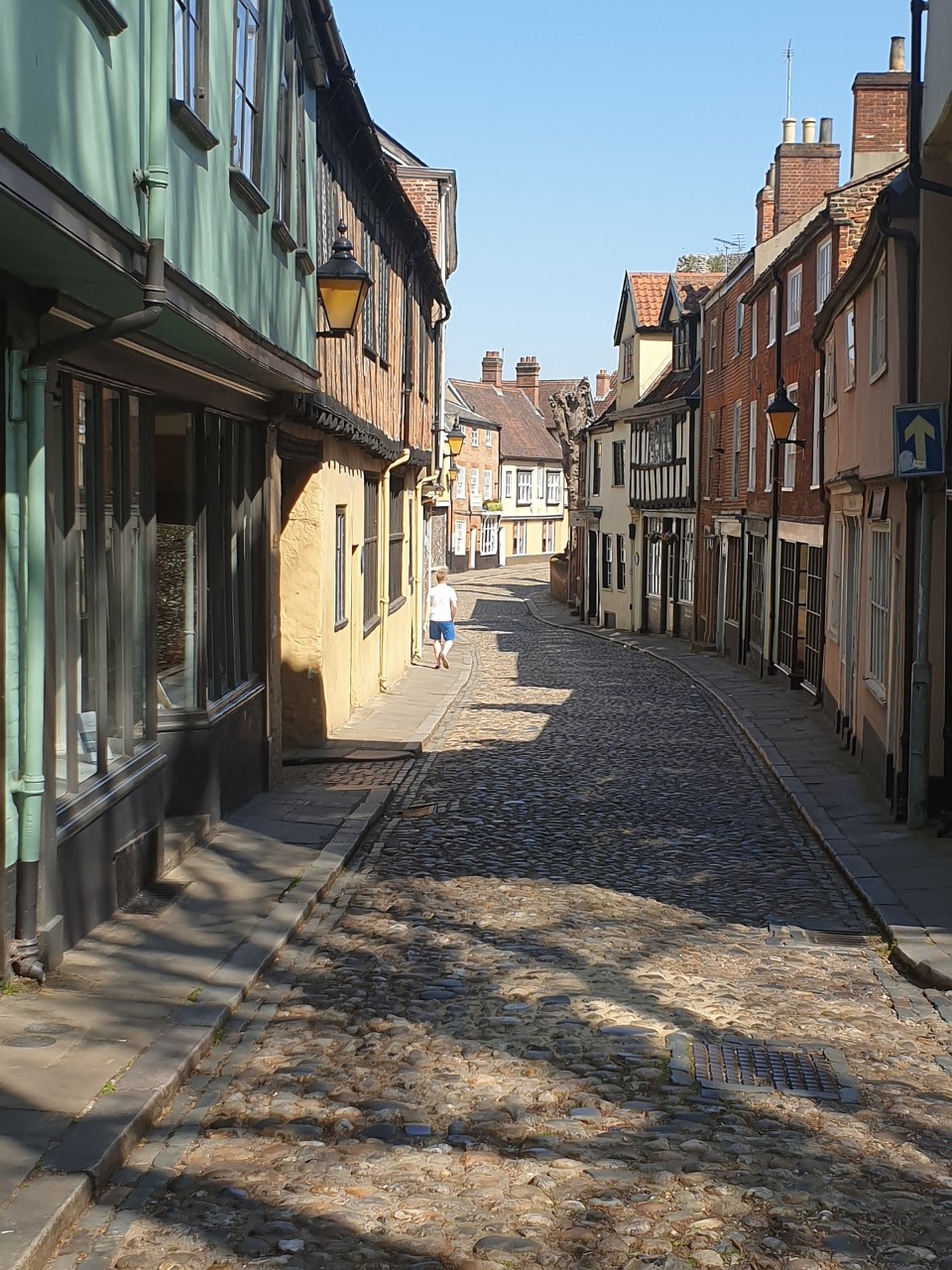 If shopping is your thing, Norwich is just the place for you. Norwich Lanes are a delight to behold. Jarrold is a family run department store where you’ll find all the products you’d expect from a high-end establishment. We’ve visited a few times but the stand out for us has got to be the superb food hall! The choice of chocolate alone is amazing. Established in 1823, it’s great to see an independent department store thriving, there don’t seem to be many of them around anymore.

Norwich Lanes are home to beautiful buildings which have stood for hundreds of years and which, today, house an array of businesses including music venues, galleries, shops and even a cinema in a 14th century medieval house. You’ll be spoilt for choice when looking for places to eat or drink. There are any number of artisan coffee shops and exciting restaurants. There are also numerous art galleries and craft shops scattered across the city. Independent shops sell jewellery, cards and homeware. It’s a really lovely place to explore. 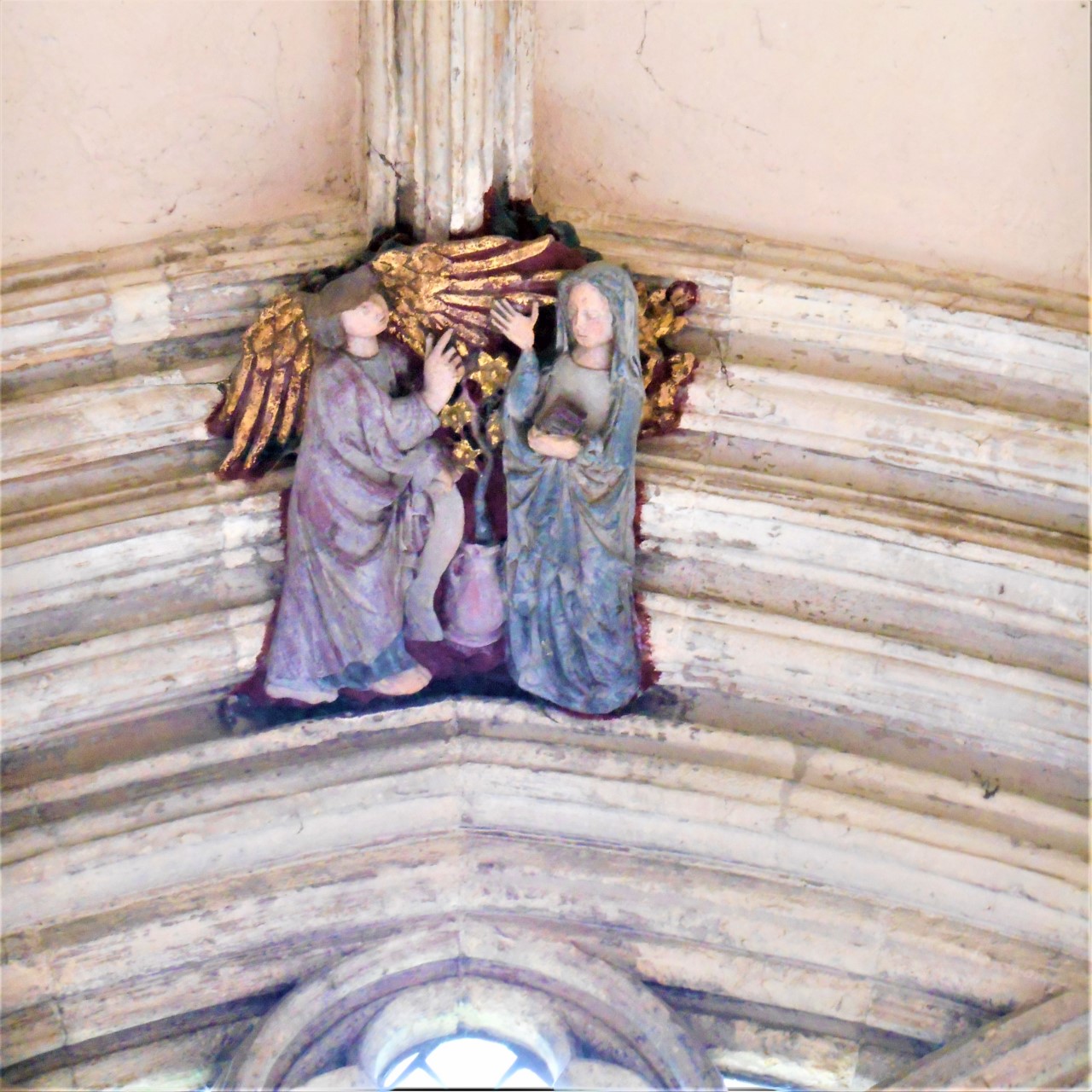 Centrally positioned, you’ll find Norwich market which dates back an amazing 900 years. Following the Norman Conquest and the arrival of a large number of Norman settlers the market was established and became a major trading hub. The market has around two hundred stalls selling a wide range of products such as fresh fruit and vegetables, meat and fish, to street foods, flowers and leather goods. The stalls are housed in little huts brightly decorated with colourful awnings. 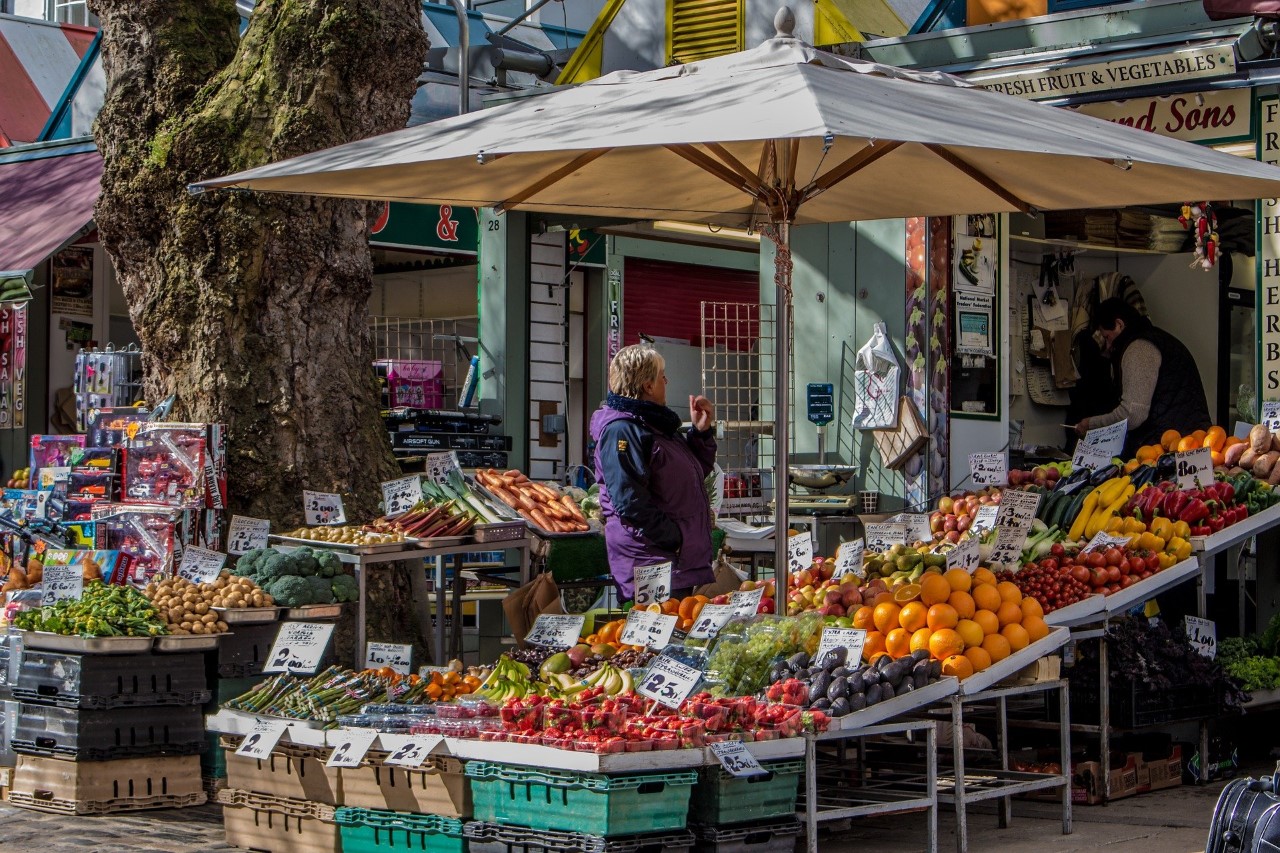 For fans of all things historical, Norwich has its own castle which is one of twelve heritage sites across the city. Its construction was ordered by William the Conqueror after the Norman Conquest. From 1894 the castle has housed

the Museum of Norwich. Exhibits include archaeological finds from the area and specimens of local Natural History, together with works of art.

Norwich, of course is home to “the Canaries,” (Norwich City FC). During the late 1500’s many weavers fleeing persecution in the Netherlands found refuge in Norwich. They brought their canaries with them and soon after the local people in Norwich began to keep canaries too. This is how the football team became known as the canaries.

Norwich is a creative’s dream. The Norwich School of Painters, formed in 1803, was the first art movement to be named after a specific region in the UK. Other well-known artists with links to the area include Manet, Rembrandt and more recently, Jeff Koons. Norwich has four theatres and three museums along with the Sainsbury Centre for Visual Arts, a museum of world-art. Under normal circumstances, i.e., before coronavirus, the city held numerous festivals throughout the year which celebrated everything from beer to historic buildings, literature and crime writing to art. Norwich is England’s first UNESCO city of Literature and home to the National Centre for Writing.

Musically, all tastes are catered for, with live music venues offering performances by artists from all over the world. Classical music enthusiasts are sure to enjoy performances by the Norwich Philharmonic and Norwich and Norfolk Chamber Music.

With an estimated population of 150,000 in 2021, Norwich is not a big city but has lots to offer visitors. There are so many galleries, shops, music venues and restaurants you’ll be spoilt for choice. There are also several parks within the city so nature is never far away. As we said at the beginning of this piece, its location in the Norfolk Broads National Park and its proximity to the coast make Norwich the ideal location for a holid