County Clare, The Burren and the Cliffs of Moher

County Clare is situated in the west of Ireland sandwiched between Connemara in the north and County Kerry to the south. To the west sits the Atlantic Ocean. County Clare is renowned for its dramatic landscape and is home to both the Burren and the Cliffs of Moher.

The Cliffs of Moher are one of Ireland’s top tourist attractions. These impressive sea cliffs tower above the Atlantic Ocean at a height of 702 feet and cover an area of 5 miles. They are home to around twenty species of birds including guillemots, fulmars, kittiwakes and puffins. During the breeding season there can be 30,000 pairs on the cliffs, a spectacle in itself! Since 1979 the cliffs have been a special protected area (SPA) for birds and other wildlife. Look to the sea and you may see basking sharks or more commonly a pod of dolphins.

Exposed layers of rock that make up the Cliffs of Moher tell the story of the landscape. There are repeating layers of sandstone, siltstone and mudstone that reflect ancient changes of sea level. In some layers trace fossils can be seen. These are trails preserved in the sediment by extinct arthropods and gastropods. 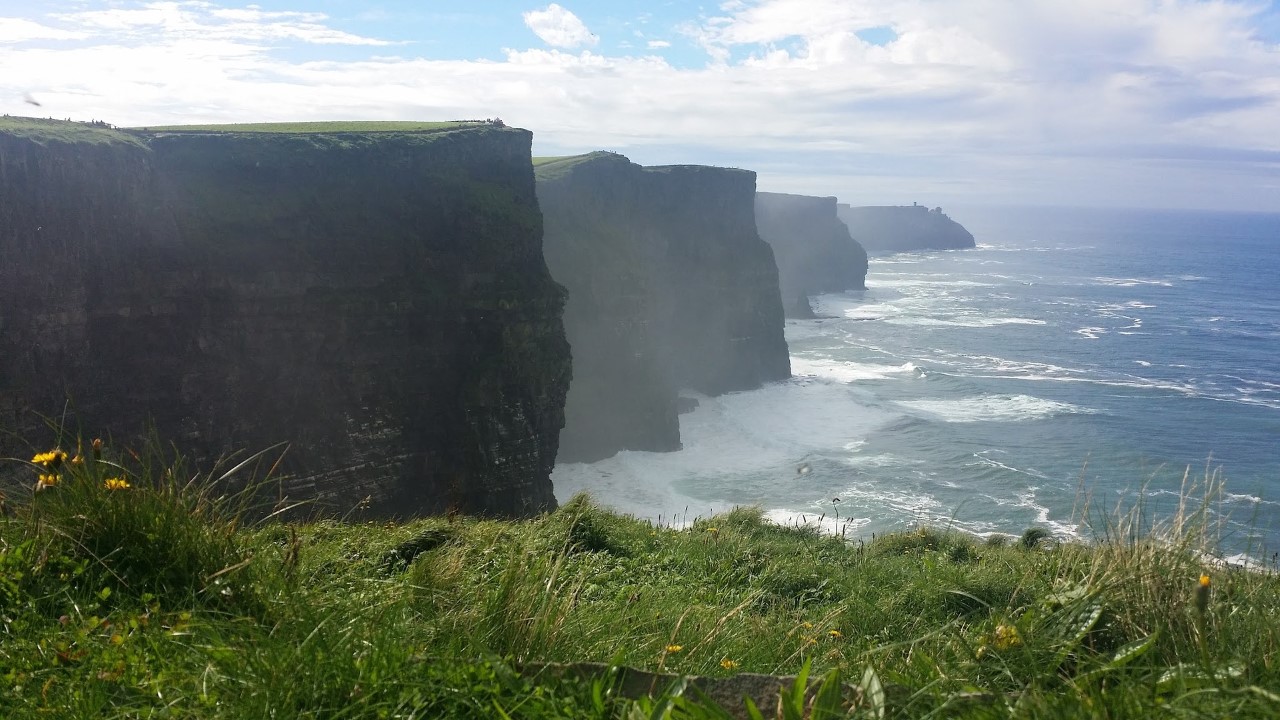 The views from the cliffs across the sea are stunning. Luckily there are well maintained paved pathways along the cliffs which have three viewing platforms in strategic places, ensuring fantastic views of the Aran Islands, Galway Bay and County Kerry. These paths are fully wheelchair and buggy accessible.

Unsurprisingly, this beautiful, rugged landscape has long inspired artists, poets and musicians. The cliffs are also of huge interest to scientists and geologists. Together the Cliffs of Moher and the Burren have been designated a UNESCO Geopark since 2011, one of three such parks in County Clare and one of one hundred and twenty across the world. Here all efforts are made to ensure sustainable tourism, the engagement of local communities and the protection of the natural landscape.

This awe-inspiring landscape has attracted movie makers and provided an incredible back drop in films such as The Princess Bride and Harry Potter and the Half-blood Prince. 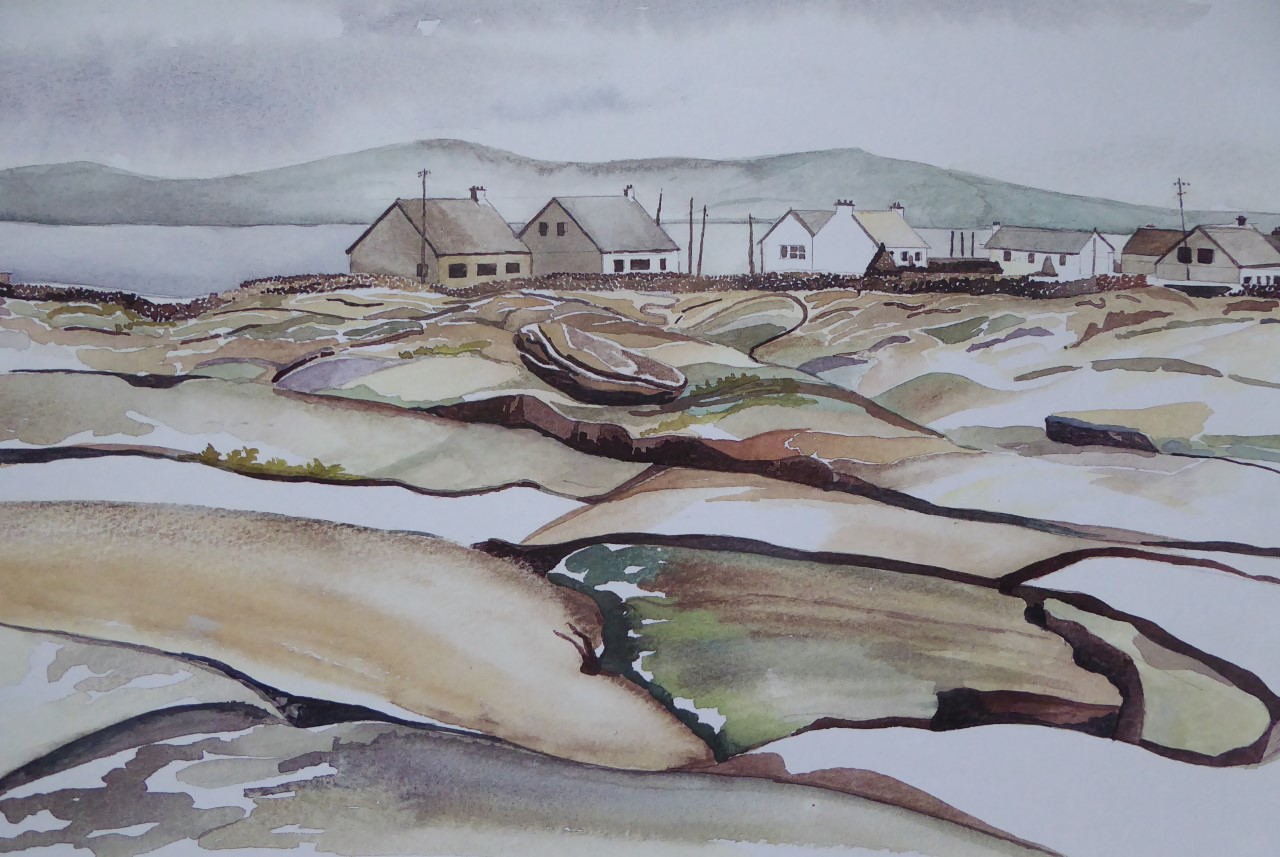 The visitor centre at the Cliffs of Moher has an informative interactive exhibition and cafes on site stocked with local produce. There’s also a gift shop where you can purchase a souvenir to remind you of your visit. If you happen to be there as the sun is setting, you are in for a treat as the sunsets can be quite remarkable.

If you are staying in the area, I believe an even more impressive way to see the cliffs is from the sea. From Doolin Pier you can do just this. From the sea you’ll appreciate the true scale of these towering cliffs and you’ll have better views of the seabirds that nest on them. You can also catch a ferry to the Aran Islands to experience island life and along the way you’ll glimpse caves and inlets and impressive sea stacks.

The Burren is vast and an amazing place to visit. It is a landscape formed of limestone pavements dating back 330 million years. At first glance it appears completely alien and devoid of life. But that is not the case at all. Limestone is eroded over thousands of years by rainwater forming channels in the rock. As the channels widen, they become grykes. The area within the grykes is known as clints. On closer inspection the grykes of the Burren are full of flowers from the Arctic, the Alps and the Mediterranean which thrive alongside each other.

The oldest rocks visible on the Burren are from the carboniferous period some 359 to 299 million years ago. At the time the area was covered by warm tropical seas and was south of the equator. The ancient natural history of the Burren is shown in the fossils to be found in those carboniferous rocks. Crinoids, corals, brachiopods and gastropods are the most common fossils to be found in the limestone rocks of the Burren.

A characteristic of a limestone landscape is caves. Doolin Cave hides an astonishing geological feature, for it is home to Europe’s largest free hanging Stalactite. A t 23 feet in length it’s also the third largest in the world! Formed over thousands of years the stalactite is 200 feet below ground. A fully guided tour (complete with hard hat) will take you back 350 million years to tell you how this amazing landscape was formed. In the most dramatic way possible the Great Stalactite will be revealed hanging from the almost cathedral like dome that is the roof of the cave. First, you’ll be plunged, momentarily, in to complete darkness before the lights are turned back on to reveal the natural wonder in all its glory.

The second most visited place in the Burren is Poulnabrone Dolmen. This is one of Irelands most iconic archaeological monuments and its oldest megalithic monument. Classified as a portal tomb archaeological excavations in the 1980’s revealed the remains of twenty-one people. Radiocarbon dating of the remains have shown that the tomb was used continually for a period of 600 years between 5,800 and 5,200 years ago. In an astonishing feat of engineering the limestone used to build the monument was extracted from the surrounding area. I’ve visited Poulnabrone a couple of times and it always impresses. Without machinery of any kind, how on earth did its creators, all those thousands of years ago, manage to lift the giant slabs needed for its construction?

A natural feature of the Burren are glacial erratics which are large boulders that were originally lifted by huge ice sheets as they gouged their way across the landscape, finally depositing them as the ice melted. Many of the erratics are from the Burren itself but those made of granite and sandstone originated in Galway and east Clare.

County Clare has everything a visitor could wish for with landscapes ranging from rolling countryside to spectacular sea cliffs. The Burren is at first glance a stone wilderness but closer inspection reveals its hidden gems in the form of specialist alpine and Mediterranean flora. Scattered across the Burren ancient man has left his mark in the form of Stone Age monuments. With attractions including lively pubs often showcasing traditional music, top quality local produce and fine dining, Clare is a great place waiting to be discovered.