London from a Different Perspective

One building that is impossible to miss on London’s skyline has got to be the Shard. Standing at just below 310 metres (1,016 ft) it is the tallest building in the United Kingdom and can be seen from miles around. Also known by some as the Shard of Glass, being constructed of 11,000 panes of glass, it is the seventh-tallest building in Europe. The award-winning Italian architect Renzo Piano, behind the design of the building, drew inspiration from the spires of London churches and paintings of the masts of tall ships by the likes of Canaletto.

The building of the Shard began in March 2009 and was completed in 2012. The concept behind the design was to construct a building suitable for multiple usage, a “vertical city.” This was achieved and the Shard is now home to several restaurants, education and medical centres, offices, retail, a hotel and residential accommodation. The Shard’s close proximity to London Bridge Station makes it easily accessible to tourists and visitors. London Bridge station has also undergone major renovation over recent years and is used by a staggering 75 million people a year making this a prime location for the construction of this iconic landmark.

Being a modern building and in light of today’s need for energy efficiency the tower was fitted with a combined heat and power plant which operates on natural gas supplied by the National Grid. A process converts gas to electricity and the resulting heat generated from the engine is used to heat the hot water for the building.

The View from the Shard was opened to the public on 1st February 2013. But before the public were allowed in somebody else sneaked in! Can you believe that in February 2011 a cheeky London fox was found living in the Shard! It is thought that he gained access via the central stairwell and lived off scraps left behind by construction workers! The fox was captured, given a check-up, fed and released back on to the streets of Bermondsey. The cheeky fox is commemorated in the Shard’s gift shop where it’s possible to purchase all manner of Shard related items.Situated on floors 68, 69 and 72, at a height of 800ft or 244m, the views from the viewing gallery and the open-air observation deck are truly spectacular. It is the tallest viewing platform in the city and features 360-degree views which, in good conditions, means you can see for up to 40 miles in all directions across the capital. We were very lucky when we went recently. It was slightly overcast but were able to pick out all manner of places from Tottenham Hotspur and Arsenal’s football stadiums to the Albert Hall, Buckingham Palace and Battersea Power Station. I think the next time we go I would take some binoculars with me so that I could spot even more of the famous London landmarks 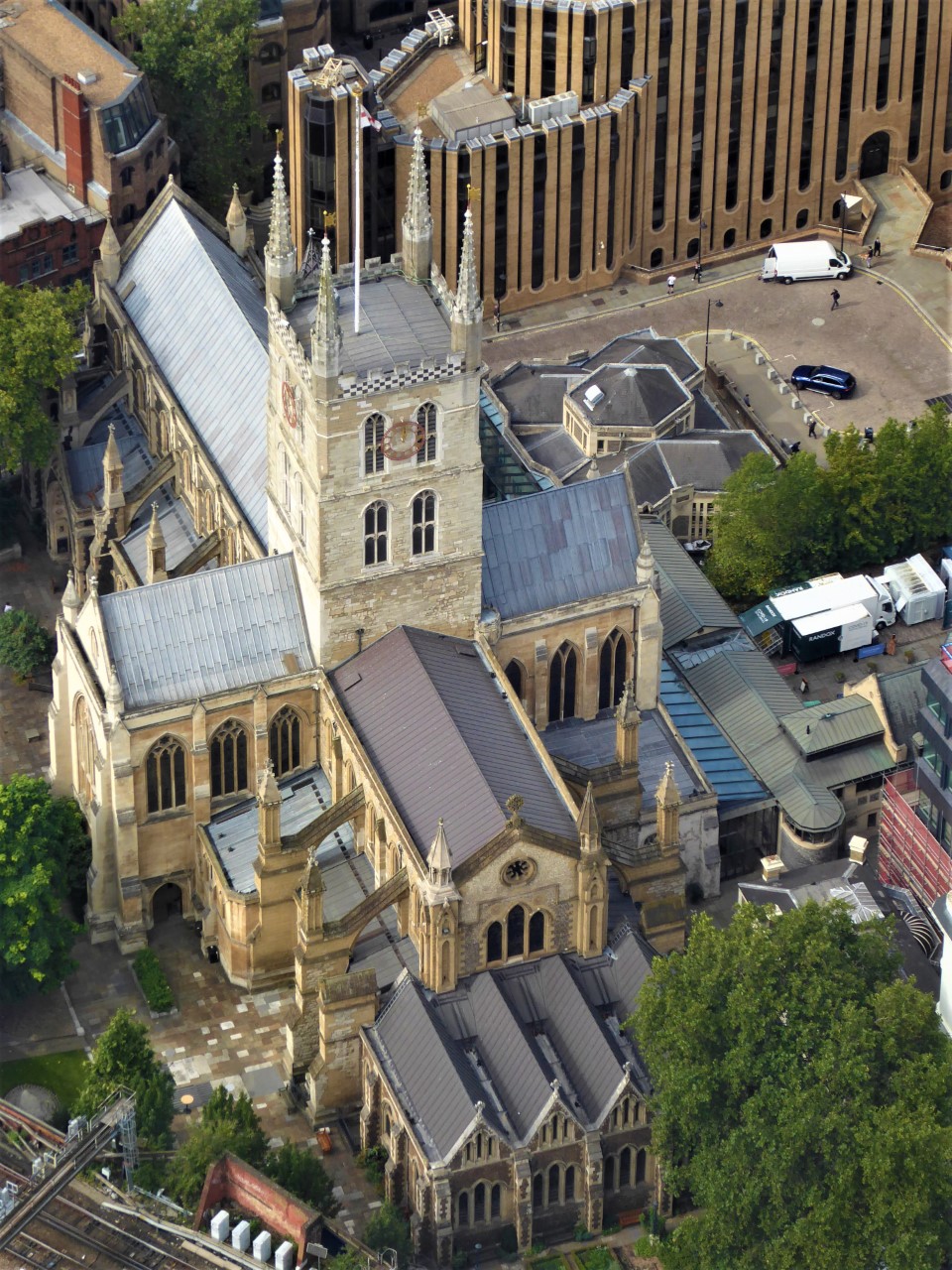 It was amazing to see the city from a completely different perspective. Railway lines and trains travelling in to London Bridge station seemed to take on the guise of toy trains. Tiny buses and cars along with miniscule sized people added to the surreal scene below but at the same time it was fascinating to see life from this angle. I found the views of the Tower of London, Southwark Cathedral and the Belfast captivating. Of course, living in London and a frequent visitor to the south bank of the Thames I have seen the Belfast many times, and I’ve even been on it! But seeing it from a height and looking down on it really emphasises the size of it. 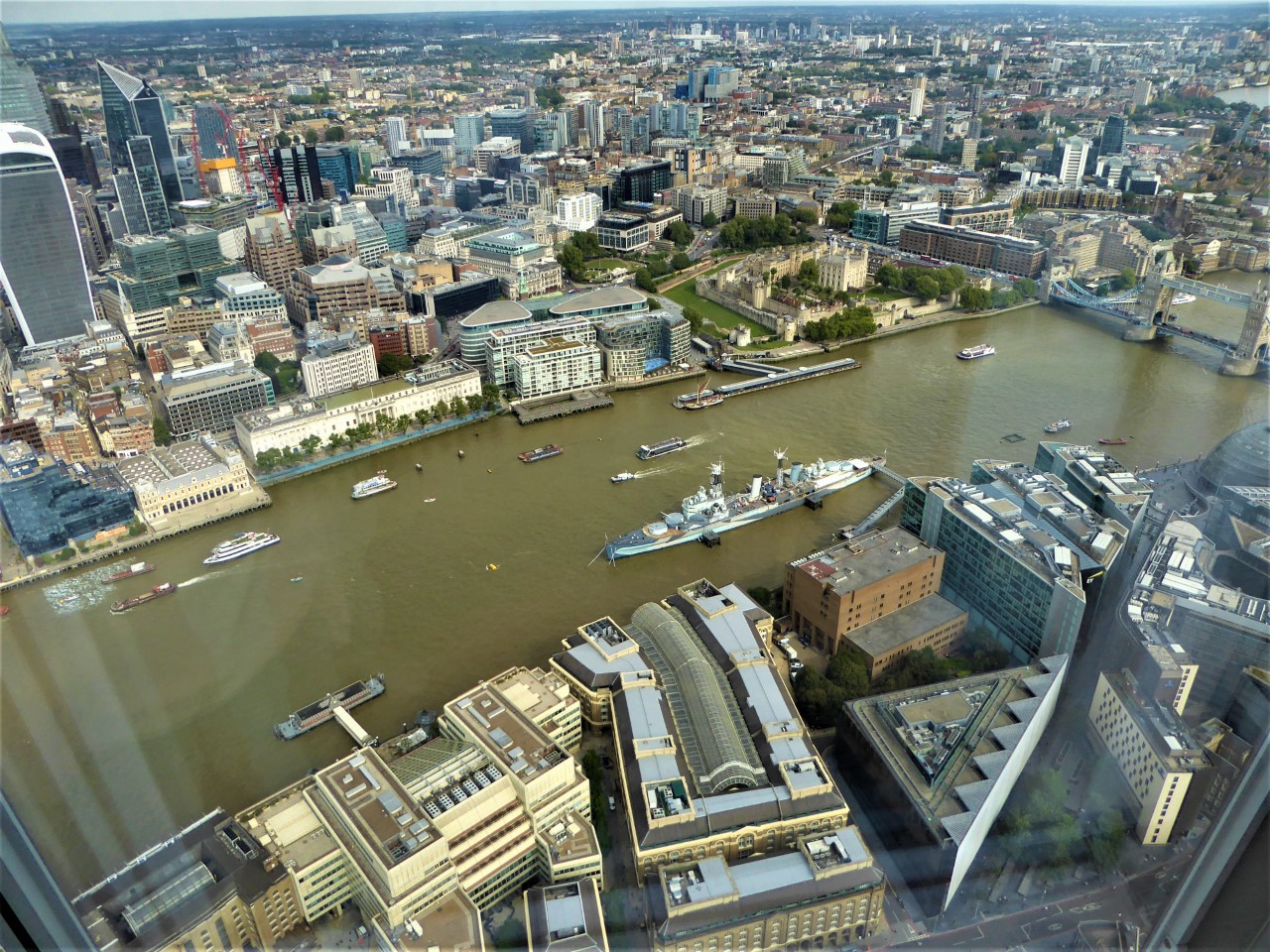 It’s lovely to see the Thames from such a height too. You can really appreciate its meandering shape from up here as in one direction it snakes towards Greenwich where we were just about able to pick out the pods of the Emirates Cable Car and the beautiful maritime buildings.

Although lockdown restrictions have eased over recent months this was our first venture back in to the heart of the city. It felt a little strange to be mixing with people again. There was the personal dilemma of whether to don a face mask or not as it’s no longer compulsory. I found some people did wear one while others didn’t. There is a bar on the viewing gallery so obviously people were free to have a drink if they wished to and it all felt very civilised. I don’t know if it’s there all the time but there was an ice cream counter there when we visited. It was very nice ice cream too! It felt quite sedate to sit enjoying both the ice cream and the spectacular views.

I’d like to applaud the staff on duty during our visit who were extremely helpful and attentive to the wheelchair user travelling with us. It makes a huge difference when there is help readily available.

Although my intention is to concentrate on all aspects of the Shard here, it’s also worth discussing another way to see London from a different perspective and that is from the river Thames itself. Many tourists make their way to the Thames to take a short cruise and lots of people receive popular “experience gifts” which can include lunch or afternoon tea on one of these cruises. The cruise that we went on included lunch and was very well organised. People were asked to keep their masks on when moving around but it was okay to take it off while seated. It was a great experience. Our table was booked in advance, a window seat (and why not) and we were shown to it promptly upon boarding the craft. The cruise headed westward to begin with, passing the Houses of Parliament and the London Eye. The views from the river were fantastic. Great photo opportunities, especially from the window seats and from on deck if you were brave enough to face the elements (it’s always breezy on the Thames!). The commentary was very good and raised many a chuckle along with a few enthusiastic cheers when we were informed that Waterloo Bridge was built during World War II by a predominantly female workforce, the men all being away fighting. Apparently, it is the only bridge on the Thames to have been finished early and under budget, (the ladies on board were very appreciative of this historical snippet!).

The food was excellent. Alcohol was available. The boat turned and headed Eastward, and we travelled as far as Canary Wharf which looked lovely from the water. The commentary continued with light hearted tales of various pop stars and actors who made the Thames there home. Alongside these tales of frivolity, it seems history was a bit gorier along the eastern reaches of the Thames. An E on the side of a building marks the site of historical Executions and of course the Tower of London was pretty bloody too. But on a nice day, in fine weather and with good company it makes for a very entertaining afternoon. 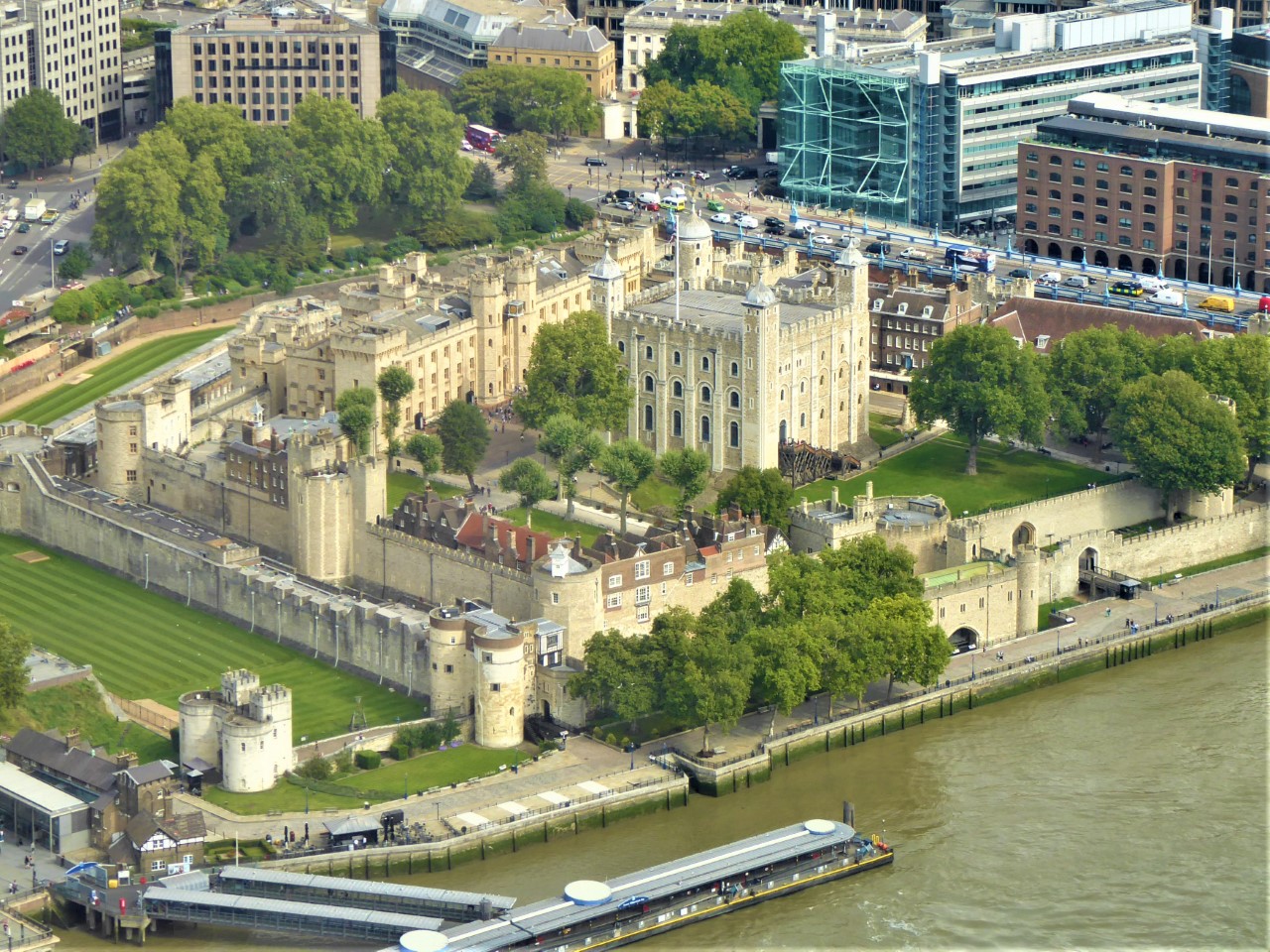