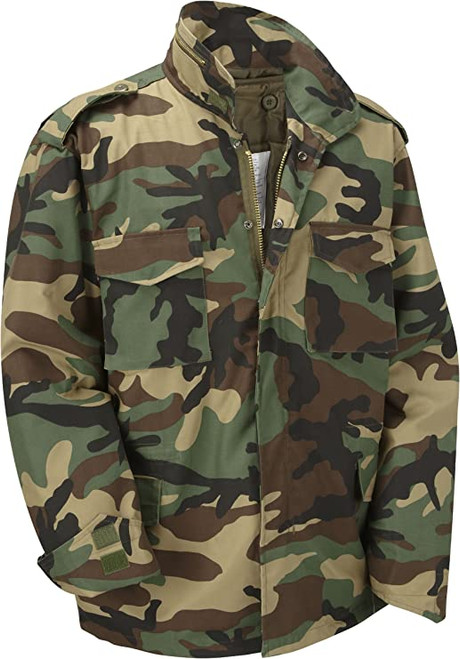 The M65 Field Jacket or M-1965 Jacket is a popular garment designed for the US military and introduced in 1965 hence the name. The M65 Jacket replaced the 1951 field jacket which was an improvement on the 1943 field jacket of WW2. The M65 Jacket was used by the US in the Vietnam war and was particularly useful to those serving in the South Vietnams highlands in cool weather and monsoonal rains. The front of the jacket features two large hip pockets as well as two medium breast pockets. The neck of the jacket features a zipper housing a protective unlined hood. The water resistant jacket is constructed of Polycotton to ensure strength and versatility. This hip length jacket features a fly front closure zip and snap fasteners to keep  the elements at bay. The jacket also features a convertible stand-up collar and shoulder epaulet. The M65 Jacket was issued until the late 1980's.

While the jacket was originally only available in OG-107 (Dark Green) the US military did introduce a Woodland Camo pattern for the jacket in 1981. The M65 features heavily in popular culture and has made appearances in The Terminator, Robocop, Jaws 2, and most recently in the television series Supernatural.

The jacket is now manufactured for civilian use in a range of colour and camo patterns, the Dallaswear version of this jacket is available in Black, Olive, Navy, Urban Camo. Woodland Camo and GCC Late Season Camo.